As in many cities, in the station area of Utrecht heat and cold are stored by individual Aquifer Thermal Energy Systems (ATES), operated by various companies, for separate buildings. There is no optimization exchange between these systems and the position of the wells results in negative interference. In a more optimal situation the ATES systems exchange heat and cold, have more optimal well locations and may subtract heat or cold from other sources such as surface water or air. 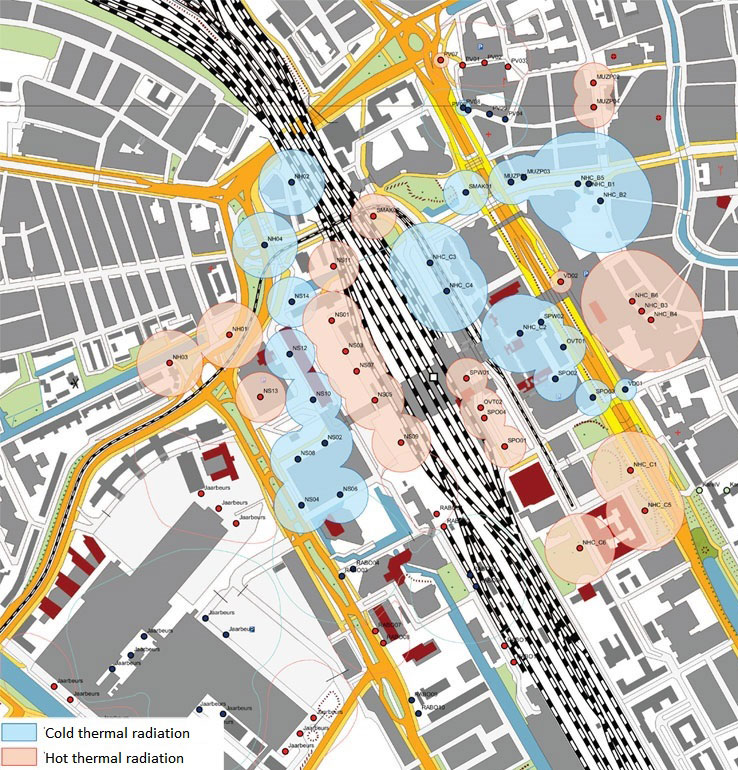 Distribution of ATES wells and their sphere of influence in Utrecht Station area.

ATES are in principle efficient in storing heat and cold for longer periods of time; the estimated recovery of the systems, when having a thermal balance, is between 75% and 95%, depending on (a) the difference between the injection temperature and the background temperature of the groundwater, (b) the pumped volume per well and (c) the influence of adjacent ATES wells. But many ATES use considerably less than their permitted well rates and have a thermal imbalance.

Coupling ATES with each other and with additional sources of heat and cold, boosts efficiency

To identify possibilities for performance enhancement, an assessment was made of:

Modeling proved that the demand of the redeveloped Station area is approximately equal to the heat and cold that can be supplied under the maximum limits of the present permits for ATES. Calculations also showed that connecting the individual ATES and withdrawing heat and/or cold from the surface water of the nearby Merwedekanaal, reduce the thermal imbalances in the present ATES and improve recovery of thermal energy in the wells.

Energy neutral with hybrid systems on a district scale

One of the ambitions of the Station area redevelopment is achieving energy neutrality. ATES could deliver a major contribution to this ambition, provided that they are part of a hybrid system, with interconnected components (e.g. ATES, surface water, solar panels), operating at the scale of the entire district. This could call for the establishment of a district-energy-provider, with its own business model and charged with the organizational aspects of a hybrid system.