As long as drainage was invented to reclaim lowlands, the land surface is subsiding. Omnipresent soft soils are often seen as problematic and indeed have been the cause of many damaged roads, conduits, buildings and other structures. This has led to sometimes excessive cost of maintenance, let alone repair. In low-lying areas, subsidence of soft soils is the main cause of relative sea level rise. Over the past years, however, techniques and methods have been developed to deal with these problems and increase the life cycles of urban structures considerably.

Preparation is the key to a sustainable foundation

Traditionally soft soils were sometimes removed before construction started, but usually the ground was simply covered with sand fill, taking into account that the soil would settle under the weight. We now know that long term settlement is often more severe than was anticipated. Well-chosen preparation methods using novel foundation materials and adaptive urban water management will reduce these effects and prolong the maintenance cycles.

The timeline of Almere City: traditional sand fill use in the 1970-ties has led to short maintenance cycles of infrastructure and private property. In new developments and coming renovations an investment in newly developed methods will increase the cycle times considerably and hence reduce overall costs

Understanding the substrate is essential

The spatial distribution of soft soils plays an important part in the suitability for specific functions and the technical demands that are placed on the preparation and building techniques that are needed to guarantee the prolonged lifetime of those functions. New developments have already benefited from city planning adapted to properties of the substrate. For instance in areas containing peat soils, susceptible to shrinkage and oxidation, drainage systems were installed that maintain high water levels. In historical parts of cities these systems are also installed to keep the wooden foundations wet. These systems also include storage and infiltration of rainwater in times of drought.

In recent years industry has developed a number of promising new techniques. This ranges from novel light construction materials to adaptations of existing foundation methods and even designs that allow buildings and constructions to move freely with the soil surface. City planners and maintenance departments are now faced with the dilemma, which method and technique to choose. Several asset management tools are and have been developed to alleviate this problem. More sophisticated calculation of settlement is now possible and maintenance cycles for infrastructure renovation with several new techniques can be assessed, including the costs. 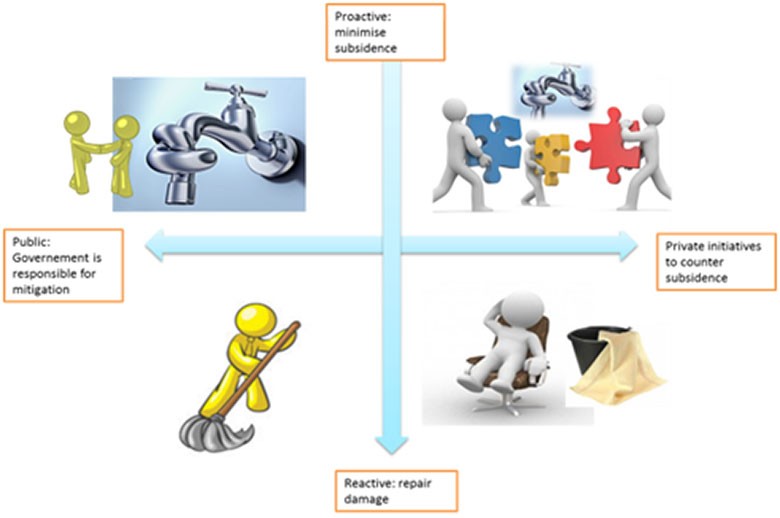 The need for public-private partnership

The mitigation of and adaptation to the nature of soft substrate soils requires a change from traditional methods to new concepts of construction. Industry is playing an important role in developing and applying innovations. Many applications require measures on private property. In many places owners now have more freedom in the design of their neighborhoods and houses, but they also get responsibility over part of the maintenance. This requires an intensive cooperation between authorities and the public. The shifting responsibilities also require a dissemination of knowledge.

For a description of the application of these concepts, download the ACC report on “Climate Resilience and Circularity in Construction assignments”, Optimizing Constructions for the Subsurface here